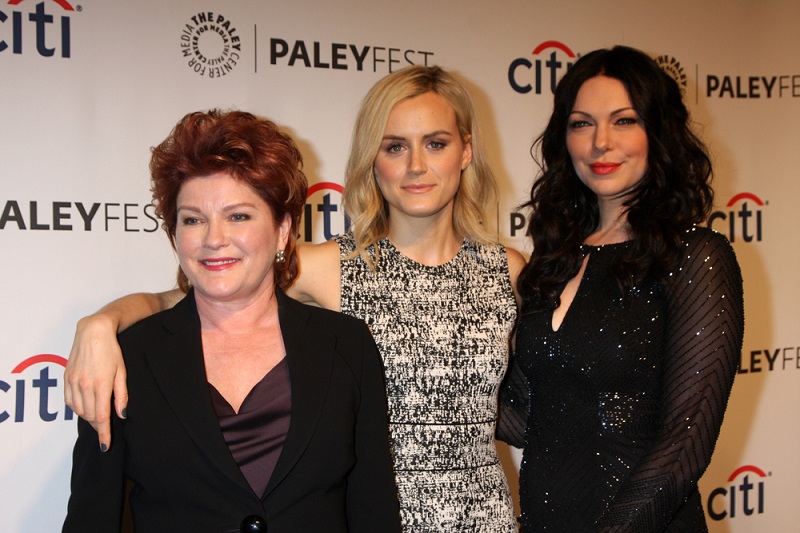 Attention fans of the hit Netflix prison dramedy, “Orange is the New Black”: The wait is almost over. Piper, Alex, “Taystee,” “Crazy Eyes” and “Red” are returning for the show’s third season, which premieres Friday, June 12.

In 2013 — the year the show’s first season premiered — Variety reported that CAA TV literary agent Peter Micelli estimated Netflix spent south of $4 million an episode for “Orange is the New Black,” about the same price as “Hemlock Grove.” In comparison, “House of Cards” reportedly cost more than $4.5 million per episode. If you do the math, the cost of “Orange is the New Black”: Season 1 was in the $50 million ballpark.

And it seems that Netflix is getting its money’s worth. The Associated Press reported that in the second quarter of 2014 alone, Netflix’s earnings more than doubled as the streaming video service passed the 50 million subscriber mark for the first time, sending its shares on a 23 percent rise. Much of these gains were directly attributed to the release of the second season of “Orange is the New Black.”

As Netflix gets ready to release the third season of its hit show — and most likely earn even more money — take a look to see how much the show’s cast members are worth, according to CelebrityNetWorth.

Taylor Schilling’s role as Piper Chapman earned her a salary of $35,000 an episode, reports Bustle.  And according to CelebrityNetWorth, the actress is worth $1.5 million.

Schilling got her big-screen debut with the indie film “Dark Matter,” which stars Meryl Streep. She also landed roles in “Argo” and “The Lucky One,” and in the series “Mercy.” Her role in “Orange is the New Black” earned her a Golden Globe nomination in 2014 and 2015.

Laverne Cox’s role as Sophia Burset resulted in her becoming the first openly transgender person to be nominated for an Emmy in an acting category in 2014.

Her acting resume, which includes roles on the television series and movies “I Want to Work for Diddy,” “Law and Order,” “The Mindy Project,” “Musical Chairs, “”Grandma” and more, has earned her a net worth of $2 million. Cox is expected to co-star in the CBS legal drama “Doubt.” Her character would be the first transgender series regular played by a transgender actor on broadcast TV.

With a net worth of reportedly $12 million, Jason Biggs scored stardom in 1999 with his role as Jim Levenstein in the smash hit comedy “American Pie.” The actor has 43 credits on IMDB, including roles in the “American Pie” sequels. In addition to “Orange is the New Black,” Biggs has also appeared in the TV series “Drexell’s Class,” “Total Security” and “Mad Love.” One of his latest projects includes the indie comedy “Drive, She Said” with Ashley Tisdale.

Laura Prepon, who plays Alex Vause in “Orange is the New Black,” has a net worth of $12 million. She is most famously known for her character Donna Piniciotti on the hit comedy series, “That ’70s Show,” which also starred Ashton Kutcher and Mila Kunis.

Although small-screen success has dominated her career (“October Road,” “How I Met Your Mother” and “Are You There, Chelsea?”), Prepon has also appeared in the films “The Kitchen,” “Karla” and “Slackers.”

Kate Mulgrew, who plays “Red,” reportedly has a net worth of $5 million. Her successful career dates back to the 1970s, with roles in shows like “Dallas” and “Mrs. Columbo.” Mulgrew has also starred in “Star Trek: Voyager” and appeared in “Cheers,” “Murder, She Wrote” and “The Black Donnellys.” One of her latest projects in 2015 is the film “Drawing Home.”

With a net worth of $1 million, Uzo Aduba plays the memorable “Crazy Eyes” in the Netflix show. In fact, her role on the show earned her a Golden Globe nomination for best supporting actress in a series, mini-series or TV movie in 2015.

In addition to “Orange is the New Black,” Aduba has appeared on “Saturday Night Live,” as well as “Blue Bloods.” She is expected to appear in the indie drama “Showing Roots” with Maggie Grace and Adam Brody.

Natasha Lyonne has a net worth of $3 million. In 1986, when she was around 6 or 7 years old, she was cast in “Pee-wee’s Playhouse.” Lyonne has since earned more than 75 credits, including roles in “American Pie,” “Kate & Leopold” and “Scary Movie 2.”

This year, she appears in “Yoga Hosers” with Johnny Depp and “#Horror” with fellow “Orange is the New Black” cast member, Taryn Manning.

Samira Wiley plays the tough Poussey Washington on “Orange is the New Black.” Her net worth is $1 million, and the actress has a few other acting credits on IMDB: “Law & Order: Special Victims Unit,” “Person of Interest” and “The Sitter.”

Playing Tasha “Taystee” Jefferson on the Netflix show, Danielle Brooks’ net worth is $1 million. Her other credits include “Girls,” “Modern Love” and “I Dream Too Much.” Brooks will be lending her voice to 2016’s “Angry Birds.” It was also recently announced that she will join the Broadway revival of “The Color Purple.”

The Cuban-born actress has a net worth of $1 million and plays Gloria Mendoza in “Orange is the New Black.” But she has been acting professionally 1999, when she appeared on “Law and Order: Special Victims Unit,” “The Sopranos” and “Blue Bloods.” Her big-screen credits include “Maria Full of Grace” and “Ice Age: Continental Drift.” Leyva is also expected to appear in “Custody” with Hayden Panettiere and Viola Davis in the future.

Taryn Manning’s net worth most likely began to grow after she starred in “8 Mile” with Eminem. With a net worth currently totaling $3 million, the actress also starred in “Crossroads” with Britney Spears, “Hustle & Flow” with Terrence Howard and Taraji P. Henson, and “A Lot Like Love” with Ashton Kutcher. Manning plays Tiffany “Pennsatucky” Doggett on “Orange is the New Black.”

Dascha Polanco has a $1.5 million net worth. She doesn’t have as many acting credits as some of the other “Orange is the New Black” cast members, but she did star in the emotionally moving “Gimme Shelter” with Vanessa Hudgens. Polanco also landed roles in “Unforgettable” and “NYC.” Later this year, she is expected to appear in the Jennifer Lawrence and Bradley Cooper film, “Joy.”

Australia native Yael Stone stars as Lorna Morello in the Netflix series. Her net worth is listed at $1.5 million, and some of her other acting credits include “Me Myself I,” “All Saints” and “Spirited.”

This article by Andrew Lisa first appeared on GoBankingRates.com and was distributed by the Personal Finance Syndication Network.